“Write with a passion…unlike everything else….it’ll only cost you…your imagination”

How Mad are You? Mission Black Friday Shopping. 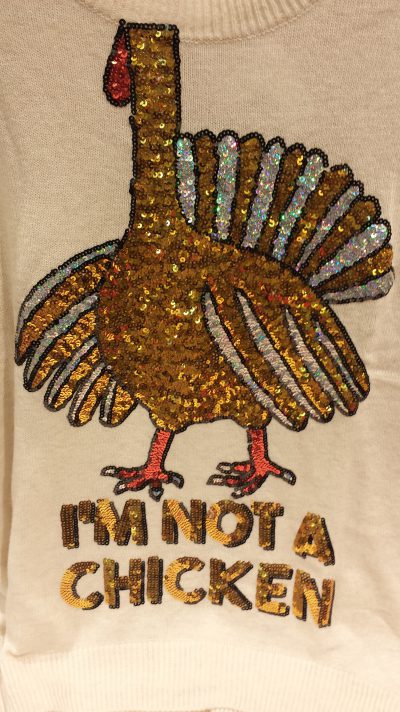 Yes Folks. I went Black Friday shopping. Don’t ask why. But instead Why NOT?

Honestly, I think it was a case of Affluenza!

Were the deal’s worth it? Yes, No, Maybe.

The picture you see above is of a sweater from H&M.

Brahmin Purse.  Michael Kors Watch. Makeup. Anything else that seems like too good of  a deal to pass (of course keeping in mind my budget).

Went straight to Dillards first, cause I really…I mean really wanted a purse and Dillards has good purses. I’m not gonna spend more than $100 on a purse. I don’t care how fancy it is.

Store opened exactly at 8 am. But by the time I got to the purses section all the crazy ladies around me had grabbed…not one…or two…or perhaps three…but pretty much all the bags their two hands, arms, and armpits could hold.

The worst part. I leaned over to get this leather crossbody….and right through my fingers…right in front of my eyes slipped the 6 bags that were on sale for $49. This lady grabbed all of them.

I mean I understand you probably want to grab them as gifts unless you are a hoarder, then I beg to differ, but seriously have a little heart for all the people around you that would have been happy just getting one.

Slowly, but steadily I picked up my speed and moved swiftly across to the next section, hoping to lay my hands on at least 1 of those. Sure enough, everything I wanted was gone. After scavenging the purses that no one wanted, I took a deep breath, and just walked around the shop staring down all the purses others had grabbed.

I saw a lady who had 2 of the same purses. I approached her. Here’s how that conversation went.

Me:   Hi, seems like you got quite a few

Her:   yeah (half-smile, not even a full one – so much for holiday spirit)

Me:   Are you talking both, if not I would love to take one.

Her:   Well, I’m gonna first ask my friend if she wants it.

Me:   Ok. Thanks anyways. Have fun shopping.

I walked around the purse section a few times, hoping someone would drop off at least one.

This lady in a wheelchair went right over my right foot. She didn’t even stop. Guess she was hypnotized by materialism.

I moved to the side and slipped of my shoe and rubbed my poor toe. Luckily, no damage was done. I mean…I already had a torn tendon in my elbow and arm.

I know crazy right! I went shopping with a torn tendon. See…it’s not me…it’s rather the case of Affluenza and Materialistic Hypnotism.

I noticed another lady chit chatting with her sister. She had two Brahmin purses, same color, just different style.

I decide to try my chance with her.

I know Ridiculous of me…right?

Her:   Hello  (showing off her off-white teeth)

Her: Maybe (Her sister smiles at her)

Her: Give me a Hundred bucks and you can have it (she bursts into laughter)

Me: Ha Ha Ha (trying hard not to make my laughter sound fake)

She walks away with her sister.

A Big SIGH! The craze of black friday.

That’s it. I had decided I wasn’t gonna try my luck anymore. It was time to accept that I may not get the purse I wanted, so best to move on and try my chance with something else.

Let’s see. What else did I get up early, drive through the havoc filled traffic, and squeeze past crazy shoppers for?

Well, I had a list of what I wanted remember?  Brahmin Purse.  Michael Kors Watch. Makeup. Anything else.

So I made it to the watch section and squeezed past fellow customers. Careful, not to step on anyone’s feet.

Sure enough. My eyes flattered at the one I knew would look stunning on my wrist. Before anyone else could grab it, I quickly spoke loud and clear. “Maam, I would like that watch.”

The rep opened the lock and handed me the watch. My heart fluttered as I tried on the rose gold, zig-zag strapped watch. With further ado I quickly finished the transaction and was on my way.

Moving along, I turned the corner to check out the purse section for one last time before leaving.

The second lady I had spoken to came up to me and handed me a Brahmin purse. She stated that she didn’t want to buy both, and since I had asked, she was giving it to me. I gave her a big HUG and Thanked her not only for being kind enough to give me the purse, but also for taking the time to find me in this maze like store.

Holiday Spirit DOES exist for some!

With a big smile on my face and heart full of warmth,  I strolled through the mall.

Walked in and out of a few shops that interested me.

The love of my life stood right in front of my glowing eyes.

The next hour was so relaxing…slapping, wiping, then re-applying new lipsticks…trying on exotic eyeshadows…and gliding different shades of highlights across my cheeks.

Well…Well…look at the Rep in the picture…

A Sales Rep photo bombed me. Now, that was fun!

The rest of the afternoon, I spent skipping, jolting, strolling, and peaking through the mall. Taking Selfies…Eating Auntie Anne’s Pretzels…Gulping down a large Lemonade…picking up a few Kitchen items…trying out massage chairs…and sneaking behind Santa to snap a pic in front of a Christmas Tree.

Don’t even ask…how my arm/elbow and legs were feeling afterwards!

Stay Positive Always – You know why? Trust me. It’s Contagious!